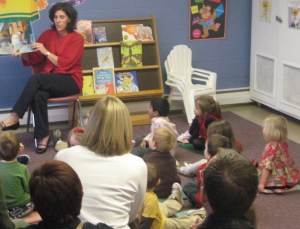 Mrs. Wodarcyzk reading Schaeffer Jo’s class the story: Where Do Snowmen Come From? 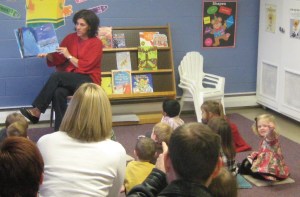 With arguably the largest preschool posse’ every seen, SJ couldn’t contain her joy
both MeMas, both Papa, Griffin & I were all there for the big performance 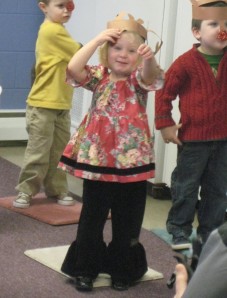 Not even glitter in her eyes would steal her excitement!

“Hey, Hey, Hey, Santa’s Coming from the Sky”
I’m not sure who would think that a three year old is capable of keeping an exciting secret like a Christmas performance, but needless to say, Griffin and I had a pretty good idea that there would be singing and a present–as she had told us every four minutes she was awake for approximately a month.
We had personally memorized all the songs they were singing–due to the incessant repetition–and knew all the details of the ‘top secret’ present (and card!) that she had hand-crafted.
Nonetheless, when Christmas program day rolled around, you couldn’t have paid me to be anywhere else but crammed into that tiny classroom like a sardine. There’s no denying the fact that SJ is a tremendously gifted firstborn-as she carried the entire class’ rendition of Santa’s coming to town (said like a true mother).
I’m thankful that all the grandparents were there with Griffin and me–it’s a memory I’m so happy to share.
Merry Christmas!